This is an excerpt of the `World Speed Survey 1997' by Dr Colin Taylor (Queensland), which was published in Railway Gazette International of October 1997, pages 669 to 674. Using the Thomas Cook Continental and Overseas timetables as well as numerous publications of the railways themselves, Taylor compiled the fastest start-to-stop train times (as at July 1997) in all 123 countries of the world with regular passenger train service except for Bosnia, Kyrgystan, Nepal, Tajikistan, Venezuela and the Isle of Man, which have regular passenger trains, but no timetable data could be obtained. So this is at the same time a list of all countries in the world that regularly operate passenger trains. 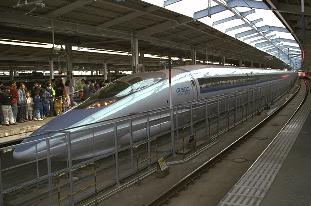 In 1997, Japan is the country with the fastest passenger trains in the world - the two Series 500 Nozomi services on the Hiroshima - Kokura section of the Sanyo Shinkansen (Shin Osaka - Hakata), operated by JR West - and has overtaken France, which held this honour in the years before.

*) According to Dr. Timothy J. B. Simmons (London) there is no more railway service in Lebanon, despite the mention in the Thomas Cook Overseas Timetable:

There are no trains in Lebanon. The railways were destroyed during the civil war. I went there in April 1996, the line from Beirut to Jbeil is disused, but the track formation has been destroyed for a considerable distance in the suburbs of Beirut, and covered over by new road construction. Thus it is unlikely ever to be restored. I reported this to Thomas Cook Overseas Timetable, but they ignored my letter. They continue to publish details of trains that do not exist.